Technology:
The world’s largest windmill for ocean generation with a capacity of 7,000 kW was completed and opened to the public on June 22. It will be installed 20 km offshore Fukushima Prefecture early July. It is for floating ocean generation and scheduled to start generation early December. The blade is 167 m in diameter. It is built by Mitsubishi Heavy Industries. The windmill is 190 m high and weighs 1,500 tons. The height including the floating part is about 200 m.

Supported by the government, companies and organization are energetically developing renewable energy projects. The new windmill is the second windmill under the government’s initiative. The first windmill was built by Hitachi. It has a capacity of 2,000 kW and started generation in November 2013. The third windmill is scheduled to start generation within 2015.


The world's largest windmill has become
the center of nationwide attention

Posted by Senryaku-kenkyu at 8:54 PM No comments:


Purchase price of renewable energy per one kW/h

Posted by Senryaku-kenkyu at 11:39 PM No comments:

According to a survey company in the U.S., Japanese photovoltaic generation related market will increase 77% over the previous year to about 1,970 billion yen in 2013 and become the world’s largest market, surpassing the Germany and the U.S. Foreign suppliers are strengthening their sales activities in Japan. They had 23% share in 2012 ad plan to increase the share to over 30% in 2013. Because some predict that the current booming solar cell business is going to create a bubble, companies involved in the photovoltaic business are required to make a difficult management decision.


The dye-sensitive solar cell of the world's  highest efficiency
developed by Sharp
Posted by Senryaku-kenkyu at 2:01 AM 1 comment:

Technology:
A huge off-shore wind turbine to be installed 20 km offshore of Fukushima Prefecture was released to the public. It is currently the largest wind turbine ever built in Japan. It is a floating type wind turbine built by Mitsui Engineering and Shipbuilding. It will start operation coming October. It is 106 m high above the sea when it is installed. The windmill is 80 m in diameter, and the output is 2,000 kW.

Building this off-shore wind turbine is part of the government-funded substantiative experiment, and a total of 11 organizations including universities, trading companies, and shipbuilding companies participate in this project. The project team is scheduled to build the world largest off-shore wind turbine that has an output of 7,000 kW in 2014. Details of this project are available in English.

No. 84: Kyocera gets an order for its photovoltaic generation system from JA Zennoh (June 24, 2013)

Kyocera has competitive edge in the technology to put various shapes of solar panels, such as trapezoidal and rectangular ones, with no space between them. Because Zennoh’s plants and livestock barns have various shapes of rooftops, they reportedly outdid Chinese makers that competed with low-priced products. Kyocera plans to increase the production of solar panels 25% over the previous year in 2013.

Photovoltaic generation on the
rooftop of a livestock barn
Posted by Senryaku-kenkyu at 5:24 AM 1 comment:

Technology:
Fujifilm will put its newly-developed sheets used for solar cells on the market. The sheet is the so-called back sheet attached to the back of a solar cell to protect it from heat, humidity, and ultraviolet. It oxidizes should it be exposed to air and water, but the company increased the durability of the sheet by mixing special compound with polyethylene terephthalate (PET) and applying its own unique technology to blow up film. The new sheet has a life of 30 years, three times more durable than the existing products on the market. It is priced at 20-30% higher than the standard back sheet. According to European Photovoltaic Industry Association (EPA), solar cells with a total generation capacity of 31 million kW were introduced worldwide in 2012, making the cumulative output reach 100 kW. The introduction is expected to increase 55% from 2012 to over 48 million kW in 2017.

Fujifilm had no way but to decrease the share of film business considerably because of the growing popularity of digital cameras. Actually, film sales account for less than 1% at present as compared with about 20% in 2000. The company is busily occupied with launching new business operations based on the technology it has accumulated. Late last year, it started to ship the EXCLEAR designed for the touch panel of smartphones and tablet PCs. In addition to higher precision, it can be mounted on the next-generation display because it is bendable. Fujifilm is also marketing the label to prevent counterfeiting that allows printed images and literal information to be seen only through the special filter.

Posted by Senryaku-kenkyu at 5:10 AM No comments:

Technology:
Kobelco Eco-Solutions discovered a new species of euglena that has two times more fat inside than euglena gracilis z stock, which is the currently most promising euglena, and successfully cultured it in collaboration with the University of Tsukuba. The company confirmed that the new euglena proliferates fast if it is cultured by effluent containing organic substances and purifies water. It is supposed to have the same degree of combustibility as coal. The company wishes to put a system from the culture of the new euglena to the refinement of biofuel toward 2018.

Posted by Senryaku-kenkyu at 5:05 PM No comments: 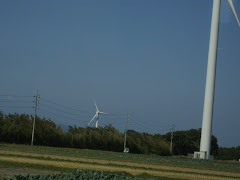 Wind generation in a rural area

Quick reference of this blog